How to Make Milk Kefir

Kefir is a fermented milk product. It has been cultured for centuries in a few regions in central Europe, but is not very prevalent in the western cuisine. Its tastes similar to strong yoghurt and yeast. 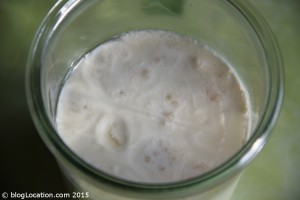 Kefir Ready to Be Strained

The Benefits of Drinking Kefir

The kefir contains many nutrients similar to the milk it is made of. Additional beneficial probiotic bacteria are present along with some vitamins. Finished kefir is almost completely free of lactose. Wikipedia has a good article on kefir with a large description of the ingredients.

Kefir grains are made up of yeast and bacteria that live in symbiosis together. Once you get your hands on real grains they will last you forever and will grow in size with time. Some people sell them on the internet. Alternatively, some companies sell powder that you can use for 1 or 2 batches, but then you will have to buy new powder. 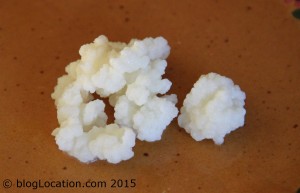 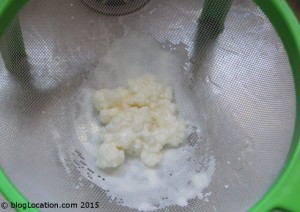 How to Make Kefir: Basic Process 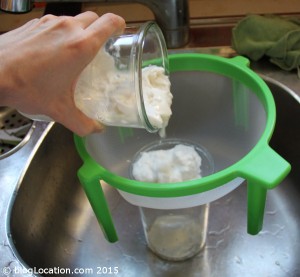 The Jar and the Strainer

Do not use any metal objects with the kefir. The electric charge that might develop when metal touches the acidic kefir could kill the grains. Only use plastics and glass. Use a glass jar that can be sealed, but do not seal it airtight because gases might develop during fermentation and they must be able to make their way out (else the jar could explode). I use a jar and only loosely place the lid on it – no air can get it, but air can get out – see picture below. I use a plastic strainer for changing the milk. 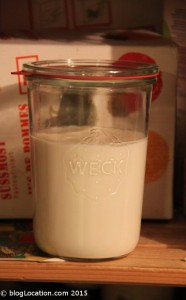 Kefir in Jar With Lid Only Loosely on Top

The kefir should ferment in a dark place. The temperature has to be above approximately 13°C (55°F) and it works fine up to 25° (77°F) or more (I have no experience with temperatures above). During summer time, I let my kefir ferment in the basement. I prefer kefir when made in a slightly cooler environment. When the winter arrives and the basement temperature drops below 13°C (55°F), the kefir stops becoming thick and stays as thin as the original milk. The taste is then not any more characteristically to the normal kefir. When that time comes, I simply place the kefir in the kitchen, where it stays around 22°C (72°F), and cover it with kitchen towels for darkness.

What Milk To Use

I used UHT milk so far (the safest choice because all bacteria are killed in it).

How Long to Let it Ferment

I usually let it ferment for 2 days. Shorter periods are possible depending on personal preferences. But I have been lazy a few times and did not change the milk for up to 7 days. The kefir after 7 days was still fine and the taste was still very similar to a 2 day kefir. My kefir has never really shown separation of white and transparent liquid so far – not that that would necessarily be bad, but you can find pictures in the internet that show such a separation.

With UHT milk my kefir has shown strong resilience against unwanted other bacteria and the like. I usually wash the glass jar with hot water before placing the new milk and the kefir grains in it. I rarely experienced problems with it.

A few times it happened that my kefir became acidic with a distinct sparkling sensation when tasting it. In these instances I simply discarded it and put the kefir grains into new milk (did not wash them with water) and the next batch turned out just fine again.

Washing the Grains With Water

Kefir grains can be frozen for months if you want to make a break from making kefir. I had mine for approximately 9 months at -18°C (0°F) and they recovered. For placing them in the freezer, let them ferment for 2 days in new milk. Then separate them from the milk and shake them a bit in a strainer, so that some of the old milk falls off. Do not wash them with water. Then place them in a small plastic bag and add a tiny little bit of new milk to it. With a tiny bit, I mean really only a tiny bit, such that the kefir grains in the bag are still largely exposed to the air and not swimming in liquid. Then place in the freezer. When taking them out of the freezer again, let them defrost slowly in the fridge. Then add them to cool new milk and let it stand for 2 days. Discard the first 2-3 batches and then try if it tastes again as it should.
When I started using my previously frozen grains again, the first 7-10 batches did not taste well and I discarded them, but it turned tasty again as soon as I stopped washing the grains with water. I somehow got into the idea that washing them with water after freezing would be beneficial, but it was not. 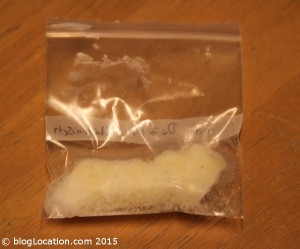