Barefoot running has health benefits for feet, knees, hips, and parts even further up the body like the spine.

Other running techniques feel uncomfortable without cushioned shoes and will quickly be abandoned once no shoes are worn. With a bit of practice, a newly starting barefoot runner will soon have a good forefoot to midfoot running technique.

Forefoot running is the technique that our ancestors used before cushioned running shoes where available and it provides very good shock absorption through the use of the feet’s, ankles’, and knees’ ability to absorb the impact shocks when the feet land on the ground.

Simply speaking, there are two ways people run: forefoot and heel striking. A forefoot striker lands first with the forefoot on the ground and a heel striker with the heel. Barefoot runners are always forefoot to midfoot strikers.

The forefoot striker in the left picture above has three places where the impact of his step will be dampened. All these three body parts (foot, ankle, knee) work like spring coils and absorb the impact by flexing. For the foot it may not be immediately obvious how: the foot usually strikes the ground first on the outside of the forefoot and only later with the full forefoot and during that time provides shock absorption.

The heel striker in the right picture above with his straight leg has no body parts absorbing the shock and a shockwave travels thought his body upward with each strike. This can damage knees, hips and other body parts. However, heel strikers usually wear running shoes with cushions and this absorbs some of the shock (1. in the picture to the right), but not as much as the body parts do for a forefoot runner.

The easiest way for a running shoe wearing heel striker to become a forefoot striker is to start running barefoot and practice forefoot striking (much easier to learn than midfoot and once you can do one, you can do the other). It is easier to learn forefoot running without wearing running shoes, as shoes severely restrict the feet’s natural movements and may even encourage heel striking.

There are people who use running shoes and are also forefoot strikers. Some of these have running related injuries and pains that may go away if running barefoot due to a better running technique. It should be noted that any shoe restricts much of the natural movement of the feet and that can cause problems at the feet or other body parts (that try to compensate for the shoe related stiffness of the feet).

For someone who uses shoes and is also a forefoot runner and is not have any running issues, the benefits of barefoot running are not directly apparent. For these people, it is probably more of an ideological or curiosity question. 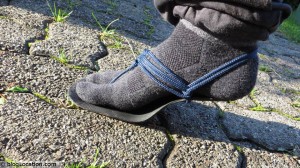 My Running Sandals by XeroShoes.com

Wearing thin running sandals is usually still considered barefoot running and the benefits are almost 100% present, while at same time the feet have some protection from broken glass or similar. In addition, thin sandals reduce the pain felt in the feet from gravel and pebbles on the ground. And lastly, sandals also help to prevent blisters. Thin sandals do not interfere much with a natural running style.

If you run using forefoot technique, your natural cushioning is automatically very good and you don’t need any artificial cushions. You can go straight to barefoot or barefoot with thin sandals. You will feel immediately that you don’t need additional cushioning, because there are almost no shocks when your feet hit the ground – just try yourself.

I have no idea what a Nike free, Nike huarache, or any other running shoe advertised as more barefoot-like is good for. In my personal opinion, there is no need for anything in between running shoes and running sandals. To the contrary, these shoes will probably make it more difficult to have a proper forefoot running technique.

The shock absorption of a forefoot running technique is so good, that it is possible to run on modern hard surfaces without experiencing problems – artificial cushions are not needed. And yes, you can and probably should start barefoot running on these hard surfaces, as it is easier for you to learn on them. Other surfaces may require constant attention where you step on and may have potentially pain inducing gravel and pebbles.

If you are interested in starting barefoot running, read my other article, where I have some useful links to videos showing good running technique (scroll down). Another point: please start slowly, it takes some time for you and your body to get used to it. If you go too long and too fast too soon, you might run into trouble. If you keep practicing forefoot running, with time your body will automatically take care of the details, strengthen your feet and legs, and adjust to a proper running technique.